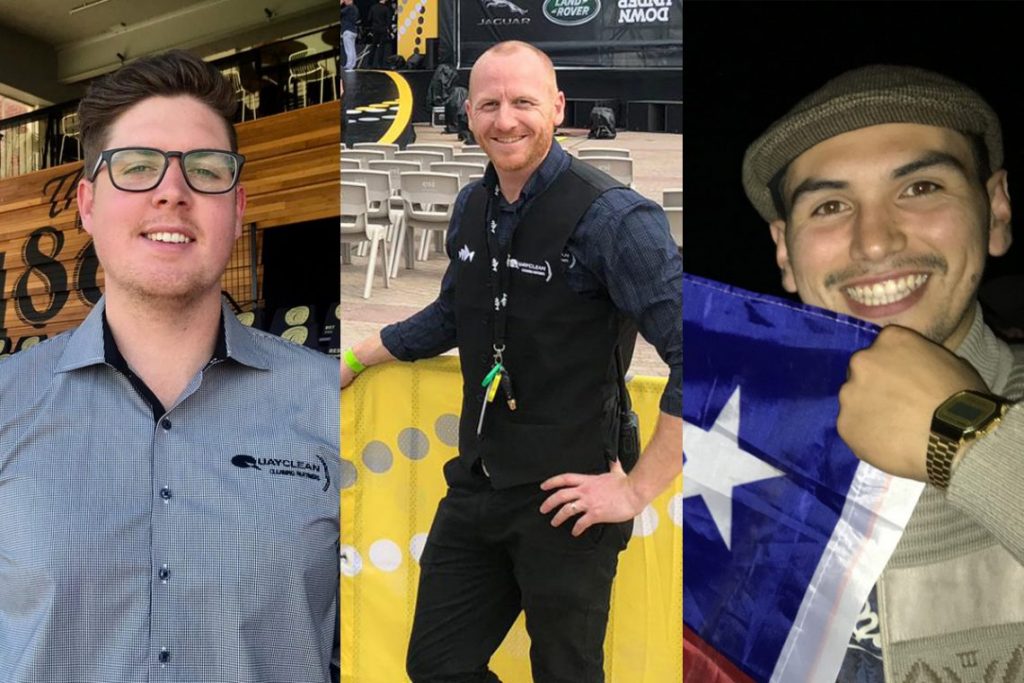 A sample of our developing young leaders with big responsibilities.

We are super proud of our up and coming leaders and are delighted to be profiling Steve Sloan, Alex De Graaf & Pedro Herrera.

Steve Sloan is Quayclean’s contract manager at the Melbourne Racing Club. Steve joined Quayclean in 2016 as our venue manager at Etihad Stadium, after completing an internship and progressing to Event Operations Manager at Kardinia Park Stadium Trust in Geelong. Following a stint of approximately 18 months leading our team at Etihad Stadium, Steve moved across to the Melbourne Racing Club (MRC) to take up the position of Contract Manager.

Our contract with the MRC covers Caulfield, Sandown and Mornington racecourses, the Glasshouse gaming venue and the Gontran Cherrier bakery, providing day to day and event cleaning, furniture movement / set up / pull down and the provision of waste & recycling services. Steve was one of the Quayclean leaders seconded to the 2018 Gold Coast Commonwealth Games earlier this year, stepping in to the role of venue manager at the Carrara Stadium for the duration of the Games. stepping in to the role of Cluster Manager for Carrara Precinct, Oxenford Precinct and Coomera during the duration of the Games. Steve was married last year to Ashlee Zahra, after an 8 year romance, and in their spare time, they enjoy going out for dinner, travelling and spending time with friends and family.

“We are very lucky to have a great blend of staff across the venues [Melbourne Racing Club] with some seasoned and experienced staff who have been working here well before Quayclean took over the contract in 2013, as well as many young and eager new staff looking to make their mark in the cleaning industry. We are also fortunate to have a client that works with us as a business partner and not just a contractor, allowing us to work together for new initiatives and planning. I have a strong interest in all sports particularly AFL and cricket and have been a tragic Richmond Football club member for 15 years.”

Alex joined Quayclean March 2017 as our contract manager (weekdays) at the Sydney Cricket Ground. Alex provided himself very quickly to be a competent leader at the Trust venues, and in November 2017 was promoted to the role of senior contract manager for the Sydney Cricket & Sports Ground Trust.  Early 2018 saw Alex also join our leadership team at the Gold Coast Commonwealth Games, working with Steve at the Carrara Stadium precinct.

More recently, Alex has been seconded to the Sydney Opera House to support the mobilisation and transition of this contract, demonstrating his ability to build & lead strong teams, across all day to day and major event works, including the opening ceremony for the Invictus Games in October.  Alex has been part of our young developing leaders program, attending the Venue Management School in 2017 & 2018. Alex is a father to 15 month little girl, Lila and with his wife Emma, enjoy living by the water on the Central Coast.

Pedro joined Quayclean in 2014 as our operations coordinator at the Melbourne Racing Club, working with our ‘set-up’ crew. After approximately 12 months at the MRC, Pedro joined our Etihad (Marvel) Stadium team leading the post event cleaning service & responsible for 90 staff per shift, and eventually promoted to contract administrator at Marvel, leading the operational delivery of services at that site.  Pedro’s leadership at this venue as seen the development of a strong team who have seen increases in customer satisfaction, venue presentation & recycling practises, including the implementation of a revamped waste & recycling strategy for the stadium.  In March this year, Pedro lead our team for one of the largest events held at Marvel Stadium – Ed Sheeran, 4 consecutive nights, 260,000 patrons, it was a mammoth effort!

Currently, Pedro has been seconded to the Sydney Cricket Ground where the team has been able to successfully implement the Container Deposit Scheme (CDS), new recycling initiatives to improve diversion percentage from landfill along with the development of an integrated team. In his spare time Pedro enjoys camping and fishing (but admits there hasn’t been much time for that lately) and enjoys all sports!